Chalay Thay Saath, Umer Adil’s 2017 Pakistani romance, can aptly be described as a love letter to Pakistan-China friendship. Although the film itself isn’t anywhere close to the peak of Pakistani cinema, its ambitions are just as grand as the mountains the movie ventures to.

With cross-border appeal in mind, as well as China’s special relationship with Pakistan at its heart, Chalay Thay Saath distinguishes itself as a rare local film with a foreign lead actor.

Starring Syra Yousuf, as Resham in the main role, the story is basically focused on a trip she takes with her friends up north, where she meets a handsome Chinese tourist, Adam (Kent S Leung). The film is so light on story at times that it feels like an ad on the northern regions of Pakistan. Hunza and Gilgit are shown in all their glory and the sights are so pretty that they make you want to go explore the north yourself. Unfortunately, the film’s actual story is quite weak in comparison.

Chalay Thay Saath can best be described as an easy-going, cheesy romcom and I suppose it would be fair to say it does deliver on that front. The problem is that it really doesn’t serve any other purpose. The cast of actors, all fairly talented and suited to their roles, can only do so much to enliven a humdrum script.

Syra Yousuf who plays the lead Resham, has consistently brought forth her bubbly charm to many a film and she isn’t any less likable here. However there isn’t any new dimension to her character or performance, and while her acting is far from bad, the movie can’t survive on her charms alone.

Assisting her is Kent S Leung, a Chinese actor who is poised as somewhat of a fated paramour for Resham from the beginning of the movie. The film makes the odd choice to have him use a voice app to communicate with the Urdu speaking bunch, rather than just show him speaking in English. 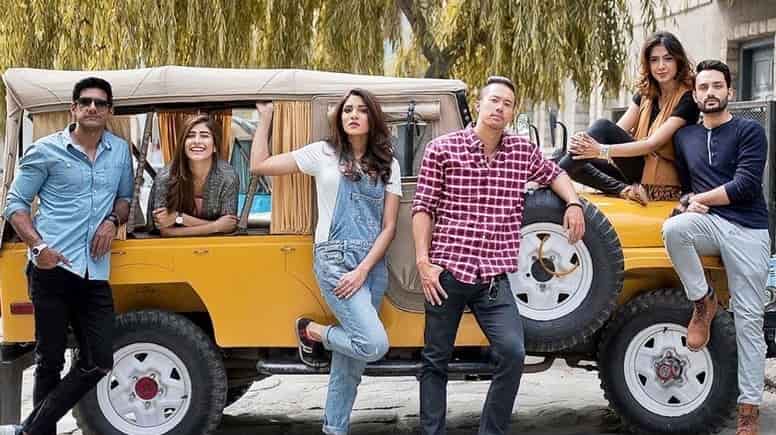 On one hand, this tool is a marked improvement over the standard dubbing over a foreign person, as is done in local features here. On the other though, you can’t quite shake the feeling that Leung’s translation device isn’t anything more than the film’s attempt at prop comedy, even when the movie takes him and his app very seriously.

The best actor in the film by far, is surprisingly Osama Tahir, a newer, lesser-known face in comparison to Yusuf or Mansha Pasha, and all the better for it. He plays the role of the sulking husband, Zain to Mansha Pasha’s Tania, and gives a marginally more nuanced performance than one would expect from the movie.

Sure he has to shoulder plenty of comedic gags, but he calibrates that with a refined performance. In fact, his scenes with practically every other actor hold more weight than you could imagine. Mansha Pasha who is terrific in nearly everything she does, is given less and subsequently can’t steal scenes the way she is known for in her other film and television performances.

This couple’s story though, come across far better in comparison to the third romantic subplot of the movie featuring actors Faris Khalid and Zhalay Sarhadi. Khalid and Sarhadi, while an attractive pair, give distractingly subpar performances. Their lines and antics are a sore spot for the entire film and their presence adds nothing to the movie overall.

Behroze Sabzwari and Shamim Hilaly are also present and their characters seem to be added simply to give the film the appearance of prestige, with the veteran actors in the mix. However the film is too shallow to really do much with even its main cast, let alone devote some energy in developing secondary characters.

Overall, although the film isn’t an eyesore or a complete failure, Chalay Thay Saath makes evident that pretty places and people can’t save a pretty weak film.