The consolation, I guess, is that at least you’re getting a superior typing case for the money. Microsoft makes the best tablet keyboard in the market, and the version for the Pro X is just as comfortable and well-spaced as some laptops. There’s plenty of travel here, and honestly if not for the slightly hollow feel to the deck, it would feel better than even those on proper ultraportables like the MacBook Air and the Galaxy Book Flex.

As for the trackpad below the keyboard, it was also responsive and smooth, though, as with most type covers, I wish the touchpad were bigger.

There’s a lot to love about the Surface Pro X’s hardware, but I’ve been most concerned about its performance. The 3GHz ARM-based SQ1 processor that Qualcomm made for Microsoft is promising, but Windows on Snapdragon has limited app compatibility that makes it difficult to recommend. Older Snapdragon PCs like the ASUS NovaGo or HP Envy X2 annoyed me because there is some serious systemwide lag. Since then, Microsoft has improved its software performance and released ARM64 support for faster programs. Still, I had reservations, and I was right to.

We couldn’t run the majority of our benchmark tests because, as Microsoft reps told us, “Not all traditional benchmark tests are compatible [with] ARM devices.” Oddly, even Geekbench, which we were told would be compatible, wouldn’t run. I downloaded a 64-bit version of Slack and couldn’t install it, but Telegram for Desktop worked fine.

I was surprised that, despite being unable to run pretty much any of our typical gaming and graphics benchmarks, I was actually able to play a few rounds ofOvercookedon the Pro X. The game ran pretty smoothly and quickly, too. But don’t expect to play anything more demanding, likeCall Of Duty.

Just as troubling as the limited app compatibility are the bugs I experienced. Barely a day after I started testing the Surface Pro X, it hung on me twice. The first time, I was trying to adjust the screen brightness and the panel stopped reacting. It refused to get brighter or dimmer, no matter if I was using keyboard shortcuts, the sidebar slider and or even display settings. I had to restart the Pro X to regain brightness control. (I’ve encountered the same screen issue two more times since.) 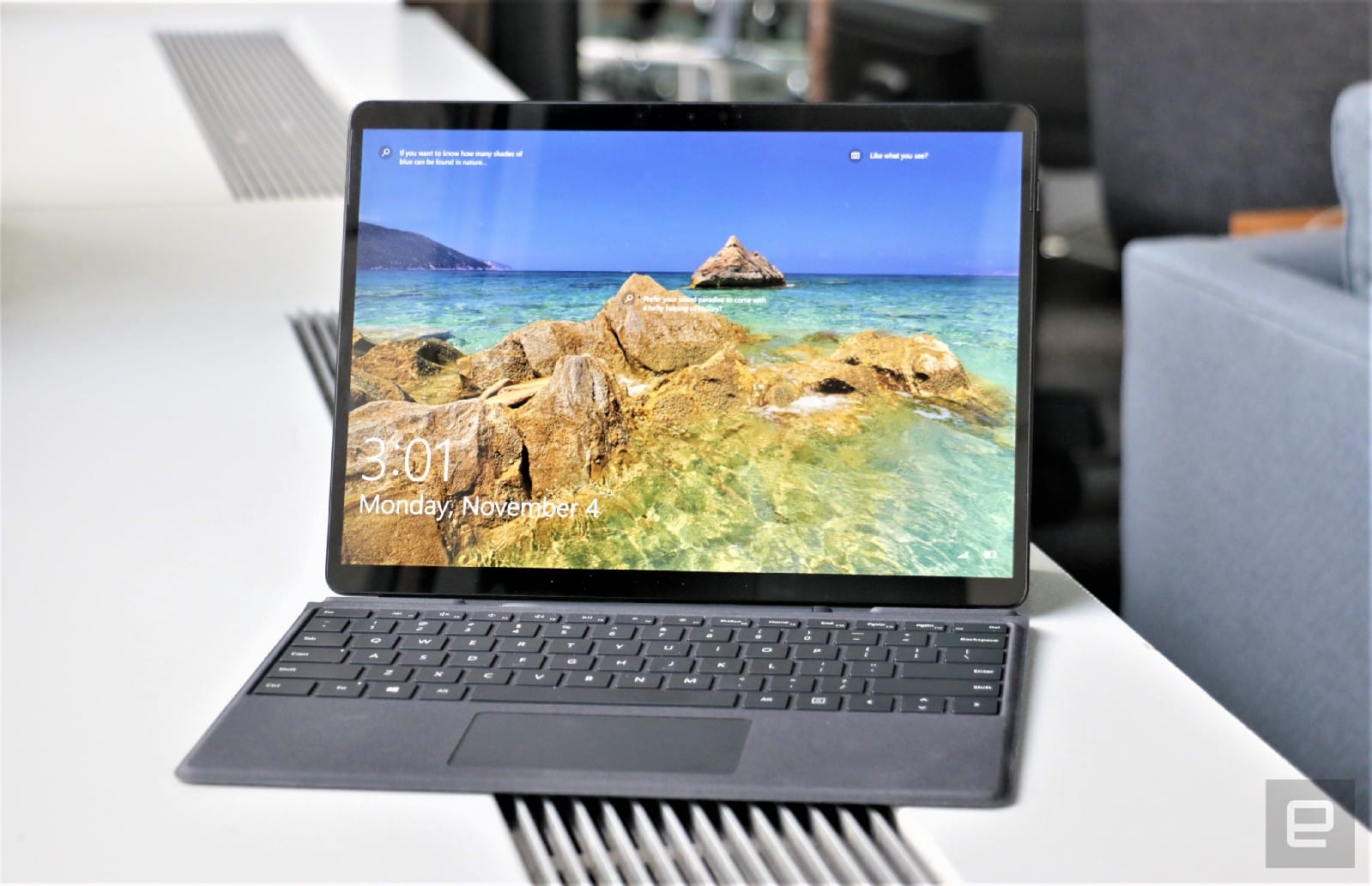 The other glitch happened after I put the Pro X in my tote bag to bring home. When I opened it to get some work done, I was greeted with a Blue Screen Of Death and a message saying “Windows didn’t load correctly”. I had to restart the PC.

Little problems continued to crop up. I was downloading our benchmark tests from Google Drive in Chrome, and after clicking through three folders, the tab died, saying “Aw Snap! Something went wrong while displaying this webpage.” Our video producer tried to play a YouTube video on Edge while shooting B-roll, and the page wouldn’t load. He had to restart the browser before he could pull up any clips.

These issues are troubling. They could potentially be fixed with a firmware update, but for now they’re definitely a cause for alarm. Even if the tablet never crashed, it would still be difficult to find apps that would run on it. 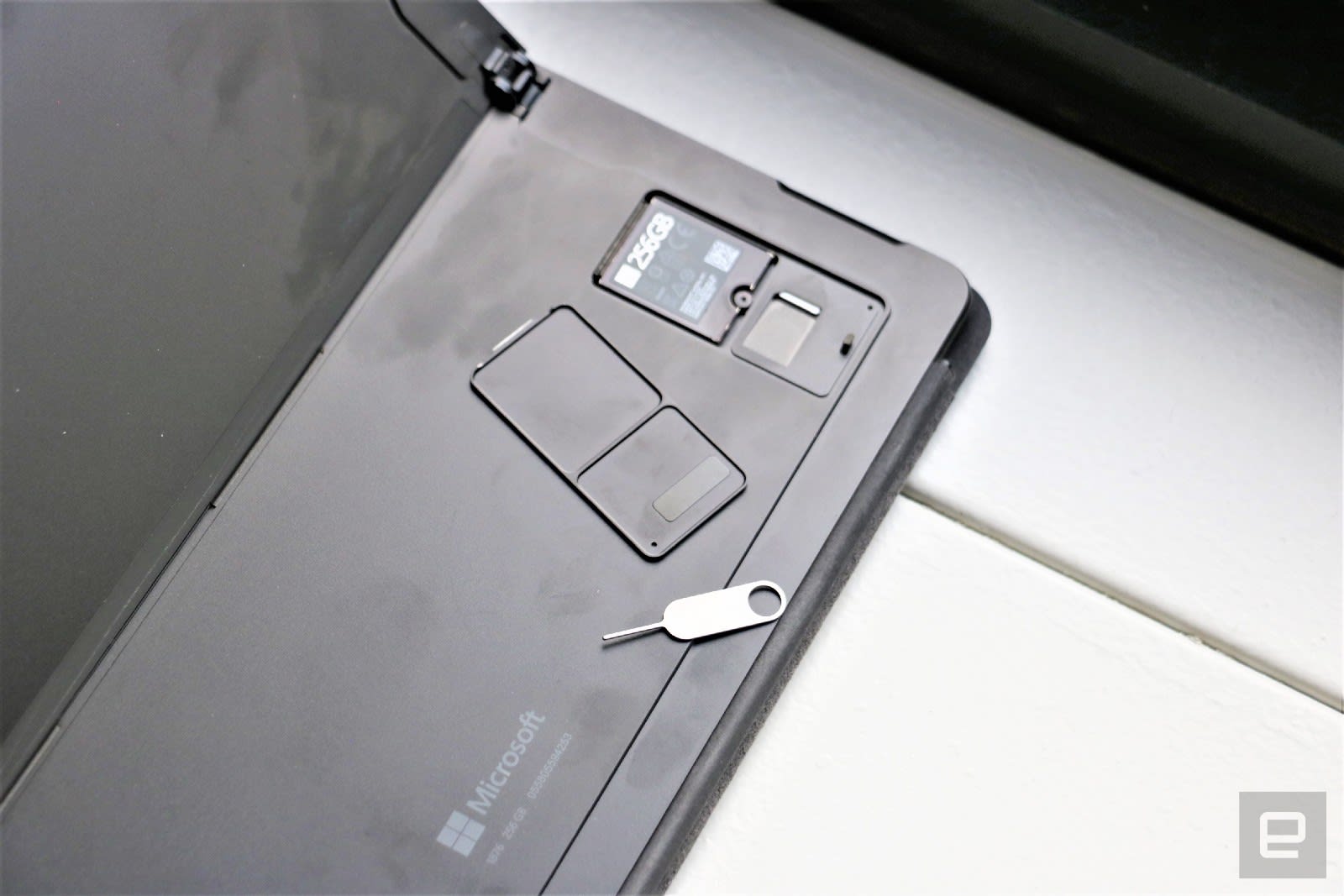 My favorite thing about the Pro X and most Snapdragon PCs is the gigabit LTE connections they pack. I used a T-Mobile SIM card with the Pro X and was frankly delighted by the fact that I could continue typing this review during a 45-minute train ride out to Long Island. It wasn’t just Google Docs that I needed — the internet connection meant I could look up the specs for competing devices, update our benchmark database and watch Microsoft’s promo trailers and our hands-on videos as I collected research. With the speedy transfers the Snapdragon X24 modem provided, all these pages and videos loaded quickly and I could get a lot of work done.

Microsoft promises up to 13 hours of normal use on the Pro X and that estimate is pretty accurate. On our battery test, the Pro X lasted close to 12 hours, which is longer than the (Intel-powered) HP Envy X2’s 10.5 hours and a lot more than the Surface Pro 7’s 8 hours. The iPad Pro 12.9 clocked a slightly shorter 11.5 hours.

I’m torn about the Surface Pro X. It’s a beautiful piece of hardware that shows Microsoft has excellent engineering chops. When the Surface Pro X works, it’s a fantastic experience. The wonderful keyboard, combined with the speedy LTE connection on the go and spacious screen, make it a delight to bang out some documents from wherever. But crashes and compatibility remain major concerns.

Microsoft says for the Pro X is designed for mobile workers who spend most of their days using a web browser or basic productivity apps. 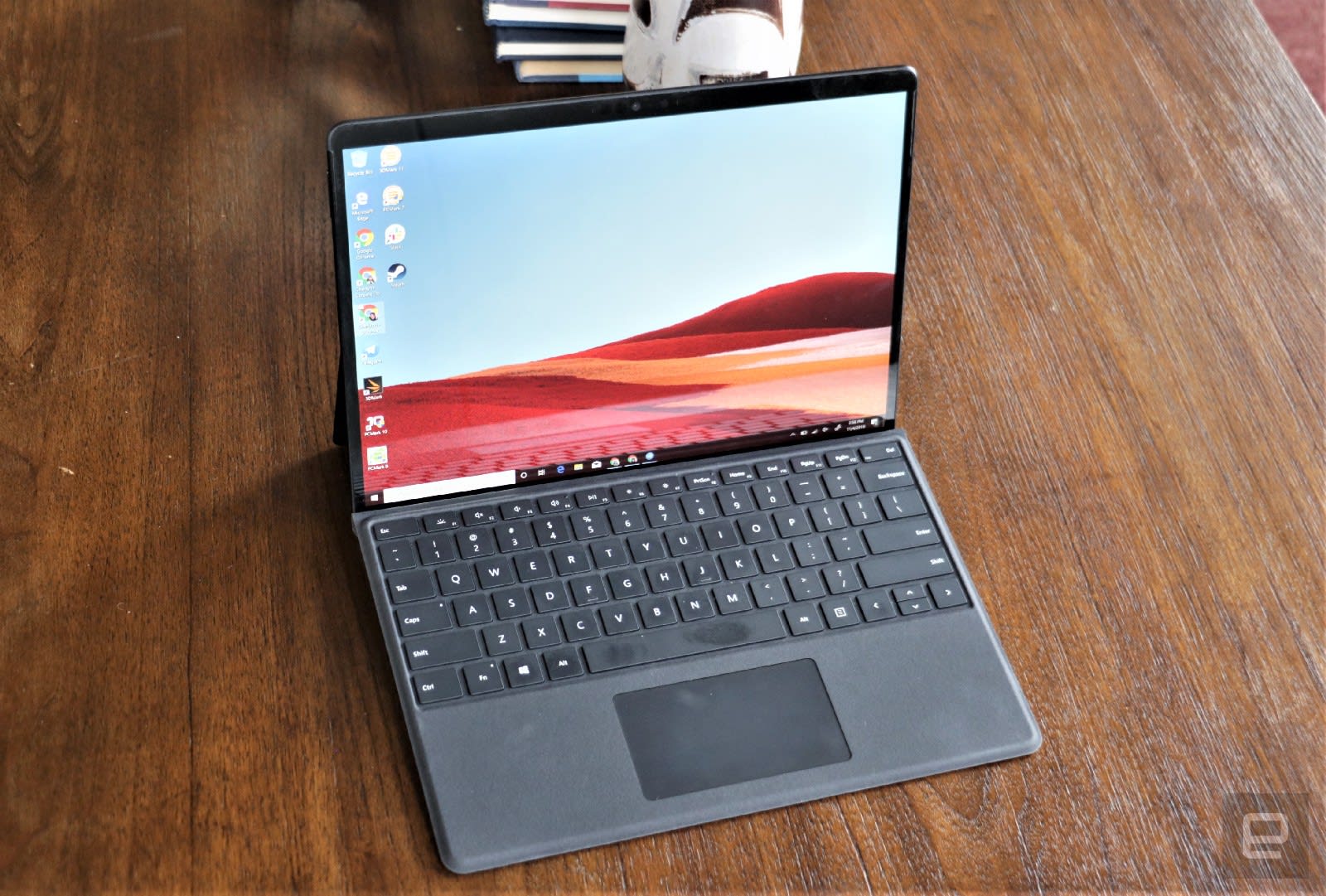 Fair enough, but asking people to pay $1,140 (including the keyboard case) for something that might not run all the apps they need is outrageous. Especially since Chromebooks are just as good at handling browser-based applications and generally cost $500 or less. If you’re in the sliver of the population that needs access to a small handful of Windows apps, then maybe the Pro X is sufficient. But bear in mind you’ll be paying a hefty premium for Windows, an LTE connection and gorgeous hardware.

All products recommended by Engadget are selected by our editorial team, independent of our parent company. Some of our stories include affiliate links. If you buy something through one of these links, we may earn an affiliate commission.