No matter what we do, it’s by no means sufficient: FM

Much to India’s disappointment, Pakistan could not be isolated as it wished for. In the past three weeks, Pakistan’s diplomatic prestige has once more surged.

The international community has recognised Pakistan’s diplomatic efforts in the region which has led Foreign Minister (FM), Shah Mehmood Qureshi, to make his visits to neighbouring countries. Moreover, foreign Ministers of Spain, Germany, Denmark, Qatar, Slovenia along others have made visits to Pakistan to understand the realities of Afghanistan.

India had been actively smearing Pakistan on platforms like United Nations Security Council (UNSC) and Financial Action Task Force (FATF), even utilising false news to undermine Pakistan’s strategic importance. Not only that, but it had also tried to have Pakistan sanctioned on false claims of giving safe havens to terror organisations. While Pakistan’s latest dossier exposes Indian involvement in terrorism in the region, especially Kashmir and Afghanistan.

Pakistan and the European Union (EU) had been cold-shouldering one another, especially due to the anti-French sentiments brewing in Pakistan since early 2021. The EU had called for a review on Pakistan’s GSP+ status on grounds of blasphemy laws and certain legal policies that did not fit the human rights criteria for the EU.

With the fall of Kabul on 15th August, diplomatic personnel from countless countries like South Korea, Australia, the US, UK, Germany, Denmark, Spain, etc gained benefit from Pakistan’s relaxed visa policy to safely evacuate them. Pakistan allowed transit passage for the foreigners landing in Pakistan and also provided secure hotels and living spaces for them to rest.

Foreign Minister (FM) Shah Mahmood Qureshi addressed a joint press conference with his German counterpart, Heiko Maas, in Islamabad, discussing important matters. Both Foreign Ministers shared the need for the international community to cooperate for stability to prevail in Afghanistan.

FM Qureshi said that he invited FM Heiko so he could better assess the situation on the ground. “It will give you a very good holistic view of what the challenges are, what the concerns are, what the opportunities are and what needs to be done in the days ahead.” FM Heiko Maas commented on developments in Kabul saying that the Taliban’s pledges are yet to be fulfilled. He reinstated that Germany is willing to cooperate with Pakistan being the immediate neighbour to Afghanistan.

Foreign Minister of Spain Jose Manuel Albares said his government would closely work with Pakistan on efforts towards peace in Afghanistan and for the region’s future. The two foreign ministers led the delegation-level talks focusing on regional situations and diverse areas of cooperation between their countries.

Foreign Minister Albares said Spain acknowledged the leverage of Pakistan on Afghanistan and therefore, desired to maintain a close collaboration with it.

“We both want the same thing – peace and stability in Afghanistan,” he said.

For Spain being Pakistan’s third-largest trading partner in Europe, he expressed gratitude for its support to Pakistan on the GSP plus status and suggested early convening of the fifth round of bilateral consultation mechanism.

He urged the government of Spain to revise the travel advisory for Pakistan because of the changed situation of the coronavirus pandemic.

The Spanish FM termed Pakistan a “very important partner” for Spain and the European Union.

He said over 100,00 Pakistanis living in Spain were positively contributing to the country’s economy, adding that “we are very happy to have them here”.

Previously, the Dutch FM had also telephoned FM Qureshi on 21st August 2021 and shared views on Afghanistan. Foreign Minister Qureshi said that safety, security and stability in Afghanistan were of critical importance and an inclusive political settlement was the best way forward.

Foreign Minister Shah Mahmood Qureshi had wide-ranging talks with the visiting Foreign Minister of The Netherlands Ms Sigrid Kaag on 1st September 2021. The talks covered the latest developments in Afghanistan and bilateral relations.

Underlining the significance of the visit, Foreign Minister Qureshi noted with satisfaction the strong momentum in Pakistan-Netherlands relations.

FM Qureshi stated that FM Luigi De Maio’s visit reflects the resolve of the governments of Pakistan and Italy to work closely for peace and stability and to advance the level of bilateral cooperation. Italy and Pakistan have a robust relationship, reinforced by 150,000 Pakistani diasporas forming a strong bridge between the two countries. They agreed to expand upon multifaceted cooperation. Pakistan appreciated Italy’s support on matters related to GSP Plus and FATF.

Foreign Minister (FM) Makhdoom Shah Mahmood Qureshi and his counterpart from the Republic of Slovenia Anze Logar exchanged views on the latest developments in Afghanistan.

A country profile on Pakistan explained that the EU is Pakistan’s most important trading partner. “As a result of GSP+, more than 78% of Pakistan’s exports enter the EU at preferential rates. Around 80% of the textiles and clothing articles imported to the EU from Pakistan enter the EU at a preferential tariff rate. Around a quarter of these imports are bed linen, table linen and toilet and kitchen linen.”

As of now, the conditions have drastically changed. The world is acknowledging Pakistan’s significance as a contributor to stability in the region with the events unfolding in Afghanistan. He underlined that the EU can play a pivotal role in this regard. The Republic of Slovenia currently holds the Presidency of the European Union. 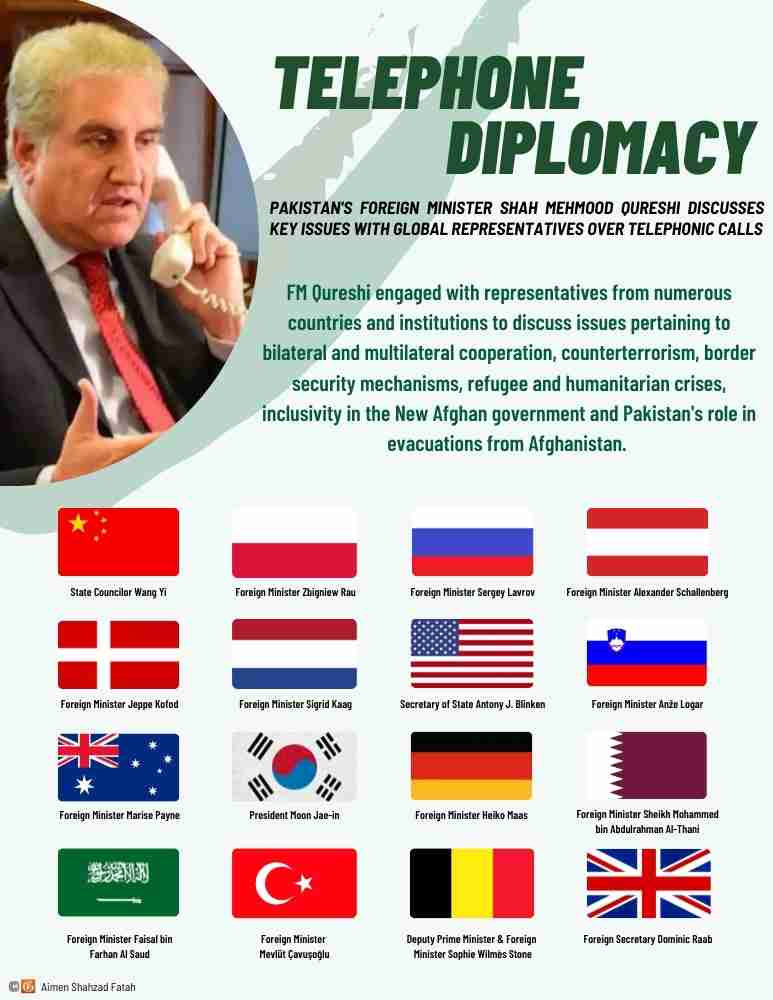 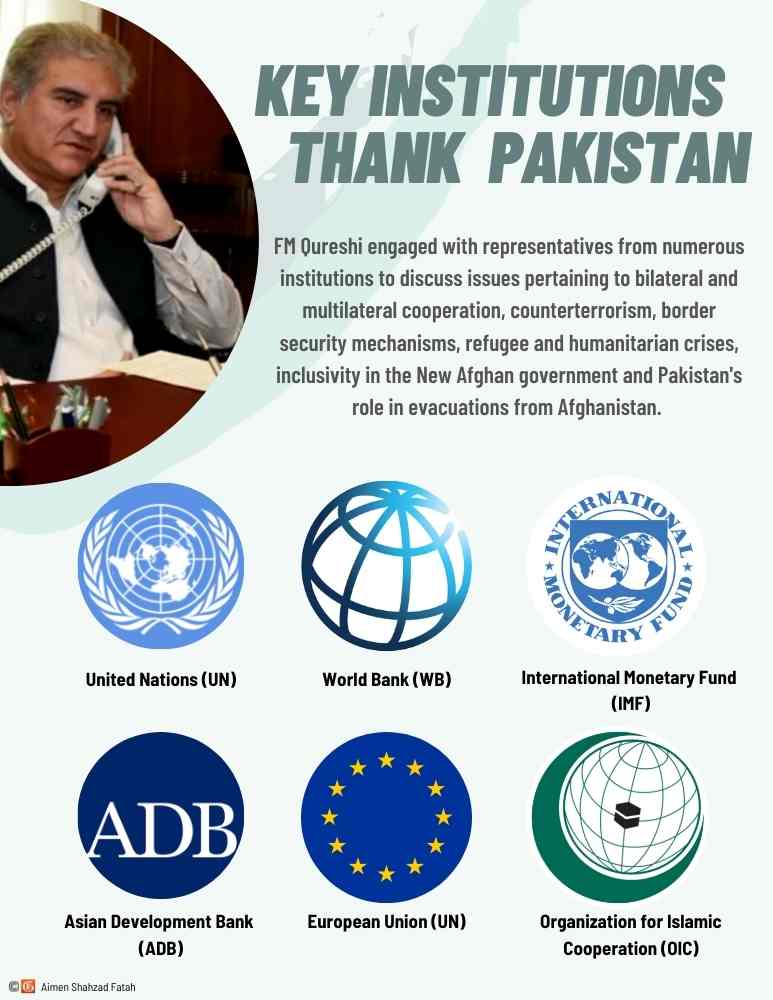 Foreign Minister Qureshi underlined that both the initiatives would improve the livelihood of the people in the border region and facilitate movement + appreciated Iran’s steadfast support on Kashmir issue, especially at the highest level plus on the developing situation in Afghanistan, the Foreign Minister remarked that a coordinated approach was important for security, stability and inclusive political settlement in Afghanistan.

Read More: FM Qureshi confirms Pakistan’s refusal to give US military its bases

Core points that all countries agreed upon:

On 8th September 2021, FM Qureshi addressed an important and timely virtual ministerial meeting on Afghanistan hosted by US Secretary of state Antony Blinken and FM Heiko Maas on Afghanistan. He emphasised that Pakistan has been profoundly affected by instability in Afghanistan for over 40 years, therefore it has a vital interest in peace. He informed the countries present that a stable & peaceful Afghanistan only be achieved through more, not less, regional and international engagement. He argued that sustained international engagement with Afghanistan remains the best counterterrorism investment for all.

This is the country that was being blamed for harnessing terrorists, but here it was serving humanity with all its resources employed. Pakistan’s Foreign Minister, Shah Mehmood Qureshi has reignited the charge for Pakistan to take regional affairs by the wheel.

Even the United States that tried to sideline Pakistan has no choice but to rely on its intelligence and government to receive information on the ground. US Republican senator Lindsey Graham had said that “no sustainable solution” without Pakistan.

“We all must remember Pakistan is a nuclear-armed nation,” he said, adding that “there is a Pakistan version of the Taliban who wishes (to) topple the Pakistani government and military,” referring to the Tehrik-i-Taliban Pakistan (TTP).

EU’s chief Josep Borrel had understood early on that there is no solution without Pakistan, thus they would offer all support required to stabilise the region together with Pakistan.

The visiting dignitaries have lauded Pakistan’s selfless efforts in the Afghanistan situation including successful safe evacuation processes, steps for regional stability and vowed to play their role for improvement in diplomatic cooperation with Pakistan at all levels.

Brian Williams’ Punchline On Anti-Vaxxers, Anti-Maskers Is A Showstopper

This Electric Car is out of this world! | Kia EV6 Review

The China that I Saw

No Time To Die: Craig’s final outing as James Bond