Cord-cutting basketball fans now have a new option for their non-stop hoops coverage. NBA TV is officially launching a direct-to-consumer subscription service today, making it the first linear TV sports league network to go over the top. The service, which will be available both on the web at NBA.com and through the NBA app, will include more than 100 exclusive, out-of-market live games, original programming and on-demand video for $6.99 per month.

You can also pay the annual price of $59.99 for a small discount.

The launch won’t impact customers with pay-TV subscriptions, as they’ll still be able to watch NBA TV by authenticating with their TV provider. 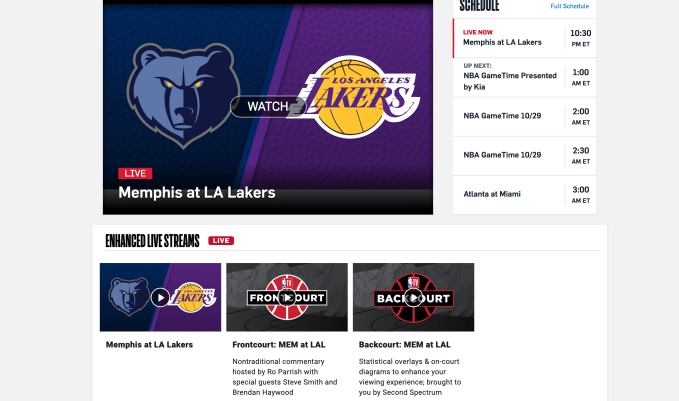 NBA Digital, which is managed jointly by the NBA and Turner Sports, recently announced a new franchise called “Center Court” where it will experiment with viewing enhancements, including new camera angles, live on-screen group chats with celeb influencers, in-depth analytics and statistical graphics, and more.

Center Court coverage will be available through the 2019-2020 season. 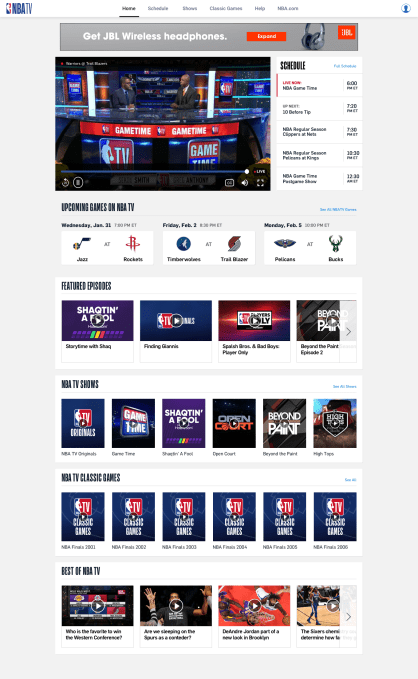 In addition to the enhanced games, NBA TV promises more than 100 nationally televised out-of-market games, plus other live games from the WNBA, NBA G League and NBA Summer League. The service also has original programming that includes studio shows and reporting, magazine-style shows like “Beyond the Point,” talent franchises like “Shaqtin’ a Fool,” a pre-game show, “The Warm Up” and nightly shows like “NBA Crunchtime” and “NBA Game Time.”

New shows that focus on social conversations, legends and current players include “The List,” “#Handles,” “Say What,” “High Tops” and “Basketball Stories.” And the service includes 24/7 access to classic games, the NBA Finals from 2000-2019 and other archival content. 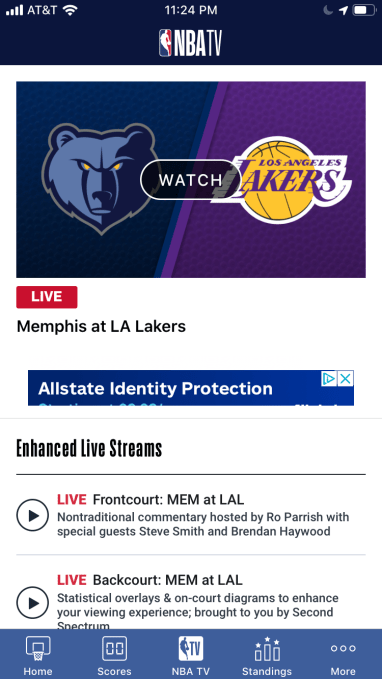 NBA TV subscribers also will be able to buy an NBA League Pass, the premium subscription to all NBA games, from the same NBA app and website where they can buy or add on NBA TV, starting today.

Once subscribed, NBA TV can be watched via the web, mobile or through connected TV devices and game consoles.

“Innovation has always been at the core of our NBA Digital partnership and the launch of this direct to consumer product, paired with new content initiatives, will provide NBA fans even greater opportunities to engage with NBA TV and our collective portfolio of brands,” said Tina Shah, executive vice president and general manager, Turner Sports, in a statement. “As sports consumption continues to evolve, we will continue to develop new opportunities for fans to access and engage with premium NBA content.”

Access to live sports is one of the areas that stop fans from fully cutting the cord with traditional pay TV. But a variety of resources have cropped up over the years to make that transition easier, including those dedicated to particular sports — like the MLB’s over-the-top offering MLB.TV — or live-streamed games across social media and elsewhere, as with the NFL’s games on Amazon Prime Video. There are also entire services, like fuboTV that grew out of sports’ fans needs for a more comprehensive live sports offering.

But even with new ways to watch, blackout restrictions often keep fans tied to pay TV, perhaps using a friend’s account to log in and authenticate…or even turning to VPNs. NBA TV won’t solve this problem, either, but it can help fans view more games and NBA content.