Cathy Scott-Clark is a prominent British journalist and author. In July 2012, her story, “Mass Graves of Kashmir” published in Guardian abruptly shocked the world. Her famous lines on top read, “For 22 years this contested region has endured a regime of torture and disappeared civilians.

Now a local lawyer is discovering their unmarked graves and challenging India’s abuses.” Cathy’s famous lines referred to the discoveries by Parvez Imroz, a Kashmiri human rights lawyer and a civil rights activist in Srinagar, the capital of the erstwhile Jammu and Kashmir – now split into union territories of Jammu and Kashmir by the Hindutva regime of Narendra Modi.

He, in the two decades before the Guardian story of 2012, had filed thousands of habeas corpus actions on behalf of the families who claimed their relatives had vanished while in the custody of the Indian security forces. In 2008, along with his team, he first discovered the huge number of mass graves in J&K. It was his group that had exposed more than 7,000 mass graves in the region over the years.

Guardian story of 2012 created momentary shock waves but even those shock waves proved mere ripples in a dead pond of human consciousness. There were discussions, promises and headlines across Indian papers but to this day no real action has been taken either by the Indian government, the United Nations, human right organizations or any entity that matters in what is usually referred to as the “international community.”

Kashmiri blood has been cheap. Though much has been written, over the years, about the pattern of staged encounters in the Indian Occupied Kashmir (IOK) – it has also been conveniently forgotten. Such is the glare of what is described as “Indian Civilization” and such is the need for US-led western bloc to woe India against China that virtually anything can be ignored.

Armed with this carte blanche, the Indian army and its auxiliaries have acted with impunity in implementing a policy of extra-judicial killings. These victims of staged encounters in IOK were usually detained prisoners, political workers, innocent Kashmiri villagers accused of supporting the jihadis – they were almost always described as “militants” killed in encounters.

One can pick up news stories from any year – since 1989. On 3 January 2021, the Indian army killed three young men in IIOJK, planted weapons on their bodies and claimed that they were militants. In July of 2020, Indian security forces staged a similar encounter in which three laborers were cold-bloodedly killed.

The victims soon turned out to be innocent, with no affiliation to any militant organization whatsoever -as reported by Al Jazeera (Outrage after Indian army accused of staged Kashmir killing”, Al-Jazeera). In 2007, Abdur Rehman Paddar from Larnoo, Anantnag, became known as Abu Hafeez, a Pakistani commander of the armed outfit (LeT), after being killed by police.

Later Assistant Sub-Inspector Farooq Guddu, a member of the Special Operations Group, confessed that police had simply abducted Paddar and killed him. They then falsely implicated him as a Pakistani militant killed in an operation and showed an AK-47 rifle, rounds of ammunition and a grenade which they stated had been recovered from his body.

There has been a consistent pattern to these staged encounters: ‘militants’ or ‘rebels’ in security forces’ custody are summarily and extra judicially executed. Then photographs of weapons and currencies found on the bodies of these dead are taken and made public with the same claim that these were ‘Pakistani militants and terrorists.

Read more: Operation Blue Star: When Sikhs were massacred by the Indian Army

Perhaps one of the most well-known examples was the murder of five Kashmiri men who were identified by the police and army as the militants responsible for the massacre of thirty-six Sikhs in Chattisinghpora in 2000 and then killed in a supposed armed encounter. Forensic tests ordered by the state government later showed them to be local villagers who were totally innocent of the Sikh massacre. 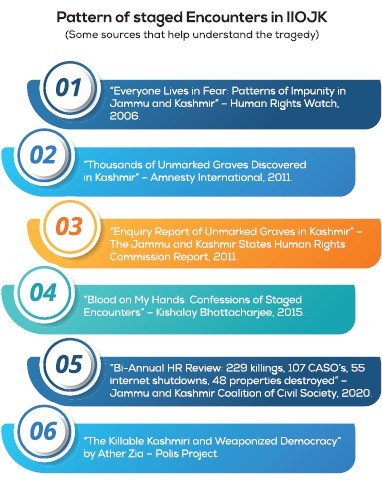 Much has been written about the mysterious killing of Sikh villagers – timed with the arrival of US President, Bill Clinton, in South Asia. Stage was set to blame Pakistan for religious terrorism at a time when global media were travelling with the US president and all eyes were focused on the region.

These staged encounters – even before the abrogation of Articles 370 and 35-A, in August 2019 – were made possible by laws like “Armed Forces Special Powers Act (AFSPA)” that lends complete impunity to security forces and makes every Kashmiri a suspect. Anyone can be stopped, or even shot at without any explanation. 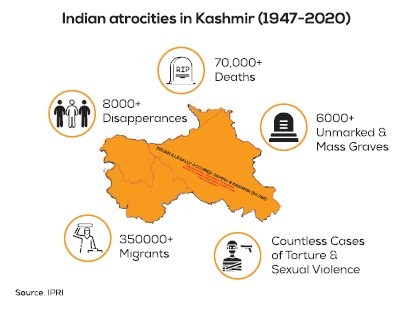 In IOJK, every Kashmiri is effectively reduced to the status of “killable” These staged encounters serve as rewards for security personnel who commit them. They contribute to their promotion and also bring them monetary benefits. In a way, Indian state rewards acts of depravity. Writing about extrajudicial killings in IOJK in 2007, a report by Human Rights Watch said: “Extra-judicial executions are widespread.

Police and army officials have shared with the Human Rights Watch that alleged militants taken into custody are often executed instead of being brought to trial…Most of those summarily executed are falsely reported to have died during the clashes between army and militants in what is euphemistically called “encounter killings.”

The pervasiveness of the practice of extrajudicial execution and staged encounters in IOJK could be measured by the number of bodies found in mass graves in different parts of Kashmir. By 2012, more than 7,000 unmarked graves had already been discovered in only three districts of Jammu and Kashmir.

Despite international attention generated by Cathy Scott’s story in the Guardian a wider search for mass graves could not be undertaken – matter soon died. And this was happening when news could pour out of the occupied Jammu and Kashmir and western journalists like Cathy Scott could roam the hills and valleys along with someone like Parvez Imroz. What is happening now is any one’s guess. Kashmiri Muslim’s blood remains cheap.