iPhone 13: Is there anything new?

India calls out the West, says meals grains shouldn’t go the way in which of Covid vaccines

‘Afridi, Akhtar, Wasim and different massive names shall be part of KPL’ Rashid

Continuing its yearly tradition, Apple had a jam-packed event on Tuesday with plenty of new updates for the entire lineup, however, like always iPhone 13 was the main event.

As with last year, the entry-level iPhone 13 will come in two versions: the 6.1-inch “regular” model and the smaller 5.4-inch iPhone 13 Mini. The screen is an OLED panel, although it’s brighter than last year’s, while the sides are still aluminum sandwiched between two slabs of glass.

The major updates in the iPhone design were smaller notches, the Face ID notch is 20 percent smaller, and a new diagonal arrangement for the camera lens on the non-Pro models. 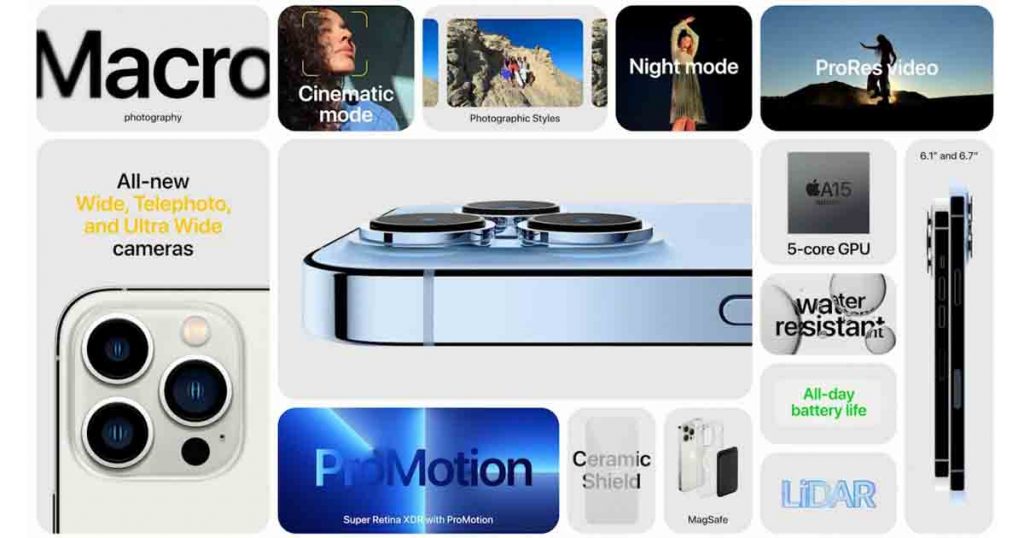 On the inside, the major highlight remained the all-new A15 Bionic chipset,  a 5nm chip, and still a 6-core CPU (with two new high-performance and four new high-efficiency cores), which is powering the new lineup, along with a faster GPU for the Pro duo.

The iPhone 13 Pro and Pro Max got the eagerly-anticipated 120Hz screens and there were camera upgrades across the board.

The base iPhone 13 has upgraded the camera to the same level as the highest model last year. The sensor for the wide camera is 47 percent bigger than last year, allowing it to capture pictures in dark.

The new wide sensor is a 12-MP lens with an f/1.6 aperture, while the new 12-megapixel ultrawide camera features a faster f/2.4 lens and 120-degree field of view. The iPhone 13 will also feature the sensor-shift stabilization technology that Apple introduced last year on the 12 Pro Max, which physically moves the wide sensor to reduce vibrations.

In an attempt at being environmentally friendly, the newly released iPhone 13, including its mini variation, will have its outer antennas partially made out of recycled plastic, a keynote speaker announced at the Apple Event 2021 on Tuesday.

The Keynote speakers, which included Apple CEO Tim Cook, announced that the products will be made using a case that is “100% recycled aluminum”.

Pricing for the new iPhone lineup starts at $829 for the iPhone 13 and $729 for the smaller iPhone 13 Mini, although Apple is once again offering a $30 discount for phones purchased through carriers.

Storage options for this year’s models have been bumped up, with Apple offering 128GB, 256GB, and 512GB configurations for the two models. Preorders for the iPhone 13 and 13 Mini will start this Friday, September 17th, ahead of a September 24th release date.

The company is also promising improved 5G performance compared to the iPhone 12, with more band support for better international 5G experiences. The company promises the iPhone will support 200 carriers in over 60 countries and regions by the end of the year.

Apple also unveiled a shiny new 8.3-inch iPad Mini and the iPad 10.2, which were the first product revealed at the event.

The iPad 10.2 didn’t get the latest A15 Bionic but got the A13 Bionic, which is still a 20 percent upgradation in performance over its predecessor A12 Bionic. Apple has also added the TrueTone feature to its entry-level tablet. The biggest update is in the storage, with the latest iPad starting at 64GB of space.

It is worth mentioning Gold-color variant is no longer available but the Space Gray and Silver colors are still around starting at $329 for the Wi-Fi-only model while the cellular variant starts at $459. One can order it right away with actual availability starting on September 24.

iPad mini 6 on the other hand has gotten many updates. On the design front, it came with flat edges and curved corners of the screen, similar to the new iPhone lineup.

The display size has increased from 7.9 to 8.3-inch and the Touch ID is to the power button. Like the entry-level laptop, TrueTone has made it to the mini, and the brightness can reach up to 500nits. The iPad comes with the latest A15 Bionic with a 40 percent jump in performance compared to its predecessors, and an increase in GPU performance by 80 percent.

The cellular version of the iPad mini now has 5G, and the Lightning port has finally been done away with for the far more universal USB-C port.

The new Apple Watch Series 7 has come with the biggest design changes seen in the watch’s six-year history.

The new watch has a re-engineered Always-On Retina display which is 20 percent larger than the predecessor, without changing the watch’s overall size. The display has virtually expanded to the very end of the watch. 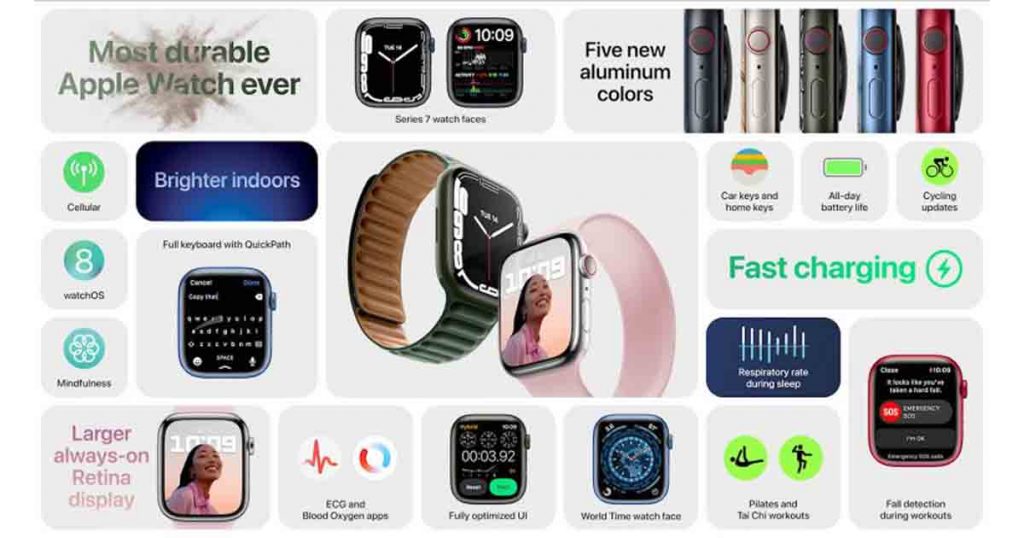 The company claims that one can cram 50 percent more text than the predecessor. The new display also means new ways to interact, with a full keyboard that will support swiping. The new watch is just a little bit bigger, coming in 41mm and 45mm sizes.

Series 7 is the most durable Apple Watch ever, with a stronger, more crack-resistant front crystal. It is the first Apple Watch to have an IP6X certification for resistance to dust and maintains a WR50 water resistance rating.

Other than that the new watch offers up to 18 hours of battery life, and uses a USB-C charger which charges 33 percent faster.

The aluminum variation will come in five colors total: the usual black, gold, blue, and red, plus a dark green that feels in sync with the rugged new support.

The Watch Series 3 is sticking around and starting a $199, and the Watch SE will be available for $279, while the new Series 7 will start at $399. The Series 7 should be available later this fall.

iPhone 13: Is there anything new?

Russia’s Lavrov: A 3rd world warfare can be nuclear, harmful

Human prices mount within the third week of struggle in Ukraine

Jemima recalls ‘shy’ Diana as she watches ‘The Crown’ Season 4