Pakistan on Sunday shared with the world another dossier comprising incriminating audio, video and documentary evidence on gross human rights violations, war crimes, genocide and torture against the Kashmiris by the “fascist Modi regime” in the Indian Illegally Occupied Jammu and Kashmir (IIOJK).

The huge 131-page document, along with a CD comprising 15 audio and several video recordings, GPS data coordinates of five Indian funded and managed ISIS (ISKP) training camps, graphic pictures of victims of the suspected use of chemical weapons also carrying documentary proofs of how the Narendra Modi regime was trying to portray the Kashmir Freedom Struggle as a terrorist activity.

The top government representatives demanded of the International community; including the United Nations and its relevant Human Rights machinery, civil society organizations, media houses and other defenders of human rights to fulfil their obligations towards besieged Kashmiris by playing their part to “end the Indian rule of tyranny and oppression” in the occupied territories.

In probably what was for the first time, Pakistan shared with the world the details of War Crimes perpetrated by the Indian Occupation Forces (IOF). It covers accounts of 3,432 cases of war crimes in which 1,178 personnel Of IOFs have been found to be involved including one Major General, four Inspectors General, seven Deputy Inspectors-General, five Brigadiers, 31 Colonels and 188 Majors and Captains.

“We expect EU, the UK and others to impose sanctions on India under their specific global human rights sanctiOn regimes for perpetrating state-sponsored war crimes.”

The document states that since Indian brutalities in IIOJK largely remain unreported, “a comprehensive dossier on Indian Human Rights Violations in IIOJK has been compiled which underscores that Modi government continues to obliterate Kashmiri indigenous identity’ due to differences in religion, culture, ethnicity and political views.”

The new dossier that focuses on Kashmir points out that with coming into power by the Indian hardliner BJP in 2014, “human rights violations in IIOJK reached epic proportions, and accounts of human suffering are reminiscent of dark ages.”

Was watching the live press conference on IIOJK. This data on India supporting IS-K is damning. pic.twitter.com/OjXWqP0l4m

The document also provided details of the 8,652 unmarked mass graves that have been identified in 89 villages of 6 districts in IIOJK.

Another key factor highlighted by Pakistan was the suspected use of chemical weapons by India against the Kashmiris. It pointed that bodies of 37 Kashmiris burnt alive by IOFs were completely beyond recognition. The document which showed images of charred bodies and pointed that the use of chemical weapons was in complete contravention to the ‘Chemical Weapons Convention’ and said that it necessitates “an impartial international investigation.”

The document with a five-page Executive Summary highlighted the areas where the Indian Occupation Forces were ruthlessly violating all international laws and conventions.

India is still violated human rights in IIOJK. The reckless use of pellet guns, tear gas and cluster bombs has thoroughly unmasked the ugly face of so called secular India.

Lets join this HT and raise your voice for our oppressed kashmiri 👇
#Kashmirilivesmatter@WeTeamlSP_ pic.twitter.com/KOSr2upzzv

The dossier said Kashmiris were also being used as human shields by positioning women and children in the line of fire during encounters, making them sleep at military camps forcing them to dig minefields and tying youth on military jeeps.

Pakistan said India had resorted to the use of snipers and cluster ammunition to target innocent Kashrniris living along the Line of Control. As many as 16 Kashmiris had been killed by Indian snipers, details of 10 victims have been included in the dossier.

One of the victims of sniper fire was only 9 years old. Ayyan Zahid resident of District Kotli who was killed by an Indian sniper on 18 February 2019. India has also been violating the international ban on the use of cluster ammunition and said in July 2019, India deliberately targeted 14 villages along the Line of Control with cluster ammunition causing four deaths and 14 injuries.

In June 2020, British MP Steve Baker urged the UK government to investigate the use of cluster ammunition and urged it to inspect the sites and evidence presented by Pakistan.

The Ministers urged the international community not to show callousness and apathy towards the Kashmiris. They said the world must force India to comply with its international and moral obligations and allow Kashmiris to exercise their inalienable right to self-determination as enshrined in international law and the relevant UNSC resolutions.

The document included 12 annexures including letters related to human rights abuses, a list of major fake encounters, reports and letters by EU, UN rapporteurs. It also contained a section depicting the genesis of the indigenous Kashmir Freedom Movement and how the brewing movement got triggered on 19 April 1931 when the Dogra rulers denied permission for Eid Sermons. It also mentioned a Times of London Report of Oct 10, 1948, which detailed how the Dogras “exterminated” 237,000 Muslims.

Quoting the British newspaper ‘The Guardian’, the dossier said the number of enforced disappearances in Kashmir range between 6,000 to 10,000. About 2,500 women, whose husbands “disappeared” were being treated as ‘Half Widows’ and were experiencing extreme distress. Since 2010, the Working Group on Enforced or Involuntary Disappearance (WGEID) has approached the Indian Government nine times to arrange a visit but has always been declined.

Pakistan also demanded of the Indian government to immediately; Stop human rights violations of innocent Kashmiris, Proceed against perpetrators highlighted in the dossier and bring them to justice, Halt demographic change and apartheid by lifting military and digital siege and release of all political prisoners, Allow unhindered access of UN, independent journalists & human rights and Civil society organizations to IIOJK.

The dossier also shared the GPS coordinates of five ISIS training Camps. It said evidence pointed that one such camp was located at Gulmarg, three in Rajasthan and one in Uttarakhand. “The Latitudes and Longitudes of these ISIS camps have been included in the Dossier.”

Pakistan also highlighted the Indian attempts to change the demographic structure of the occupied Jammu and Kashmir and said contrary to the Geneva Convention, after the introduction of the new ‘Domicile Law’ in March 2020, India has already granted over 4.2 million domiciles (31.5% of 13 million population).

The document pointed that a delimitation commission was constituted in March 2020 with the singular purpose to enhance Hindu representation and likely installation of Hindu Chief Minister. Following the amendments in property laws, all Indians were now entitled to purchase land in the disputed territory with the sole objective of converting the proportion of the large Muslim population into a minority.

It quoted the Office of the High Commissioner for Human Rights (OHCHR) report of 2018 which clearly points that “Special laws have created structures that obstruct the normal course of law, impede accountability and jeopardize the right to remedy for victims of HRVs”.

The report said the Indian Occupation Forces were subjecting the Kashmiris to the worst kinds Of torture. “432 case studies revealed that IOFs inflicted torture as a tool of intimidation and coercion. 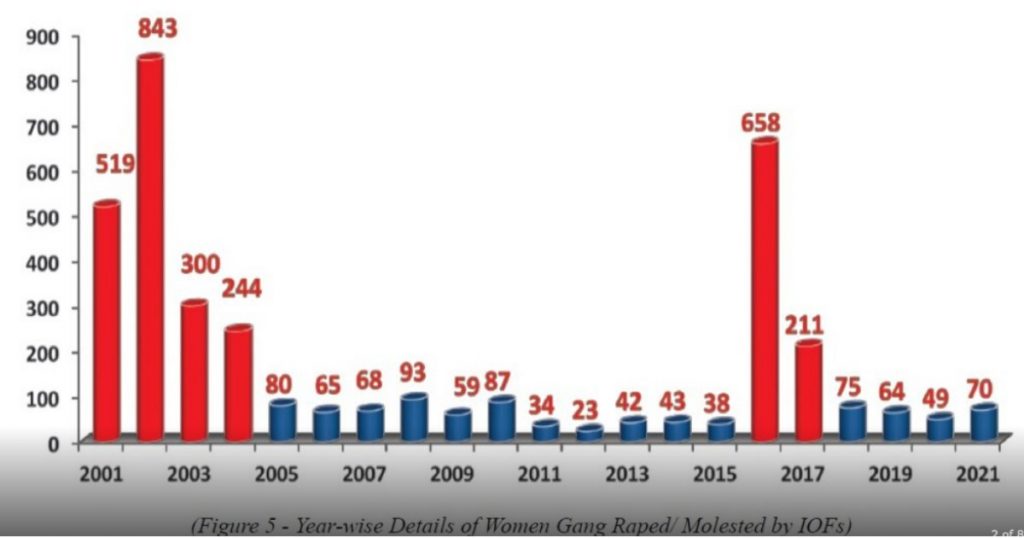 Since 2014, more than 30,000 people have faced 31 forms of torture including water-boarding; forced starvation, sleep deprivation and burning of bodies

The report also identified 239 torture cells across the IIJOK; the majority of which have been established in Northern Kashmir with 65 camps in Baramula and 53 in Srinagar. Of these 144 were controlled by the Indian Army, 52 by police, 19 by the Indian Special Operations Group and 24 by other agencies. 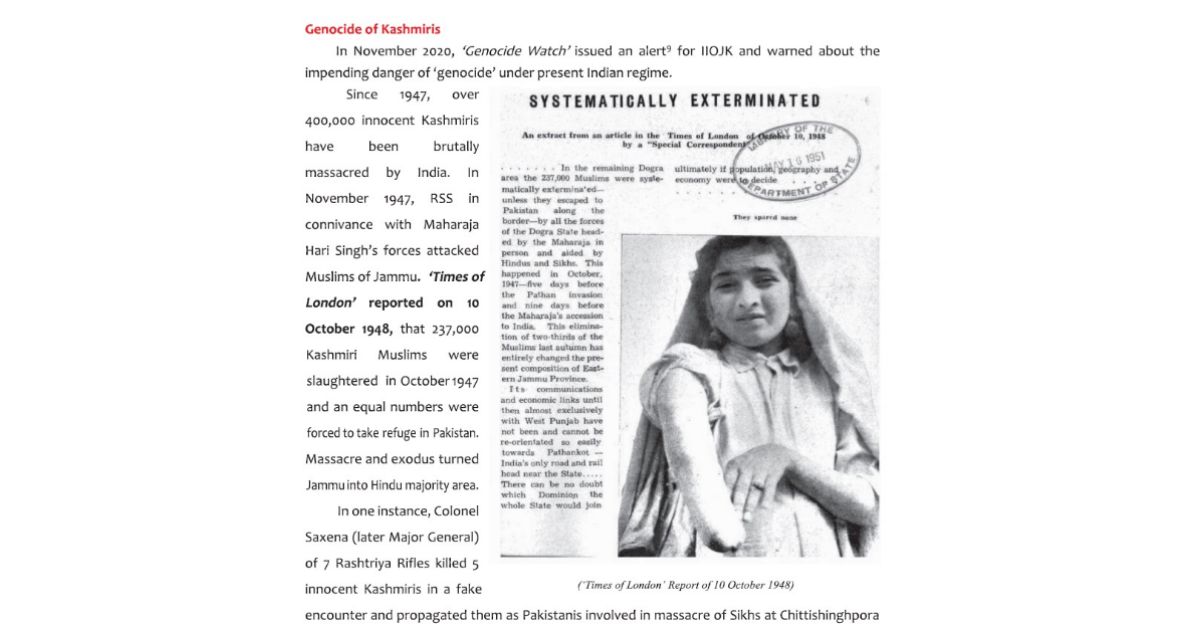 Since 2000, over 80 major fake encounters have been reported in IIOJK in which more than 160 innocent Kashmiris have been martyred. 15 pieces of irrefutable evidence in the form of audio conversations are also included in the Dossier.

According to the details in a joint operation on December 30, 2020, IOFs and Police killed 3 innocent Kashmiris in Srinagar while General H Sahi, Commander of the Kilo Force, and Inspector General Police Vijay Kumar made false claims and declared them as terrorists. Later, the slain individuals were identified as locals.

Again, on July 18, three Kashmiri youth were killed by IOFs during a fake encounter at Shopian and were declared as Pakistanis.

In December 2020, IOFs admitted that Captain Bhoopendra of 62 Rashtriya Rifles and 2 civilians had deliberately killed three innocent Kashmiris and planted weapons on them to secure prize money worth Indian Rupees 2 million.

The evidence presented in the document clearly illustrates that Indian false-flag operations were based on fabrication.

The “Nagrota Fake Encounter of 2020 was another example of BJP-RSS theatrics,” which carried similarities to Nagrota Encounter of 2016, the dossier pointed.

Read More: Taliban: we have right to raise voice for Muslims in Kashmir

Bloody week in Yemen on border of presidency and Houthi territory

Linda Evangelista, 56, says she’s grow to be ‘unrecognizable’ after CoolSculpting: ‘I was brutally...

US House approves $1bn for Israel’s Iron Dome after uproar

Family of 4 die by suicide in Andhra, two policemen arrested on abetment costs

Food The airline that crashed in Pakistan has a spotty protection document, with quite...