- Advertisement -
Amid ongoing border tensions with China, India’s defense agency has completed the final test of its third-generation anti-tank missile, which is now set to be deployed by its army.

On Thursday, India’s Defense Research and Development Organization (DRDO) announced that the Nag anti-tank guided missile (ATGM), intended for use in the four-kilometer range, has successfully completed its final trial and is now ready for deployment to the frontline.

“India today successfully carried out the final trial of the DRDO-developed Nag anti-tank guided missile with a warhead. The test was carried out at 6.45 am at the Pokhran field firing ranges in Rajasthan,” Defense Research and Development Organization (DRDO) officials told ANI.

The missile was integrated with an actual warhead and a tank target was kept at some distance, the Defense Research and Development Organization or DRDO said. The dummy tanks armor was hit accurately by the missile, reported NDTV.

India today successfully carried out the final trial of the DRDO-developed Nag anti-tank guided missile with a warhead. The test was carried out at 6:45 am at the Pokhran field firing ranges in Rajasthan.

Defense Minister Rajnath Singh congratulated the DRDO and the Indian Army for the successful trial of the Nag missile, NDTV reported. 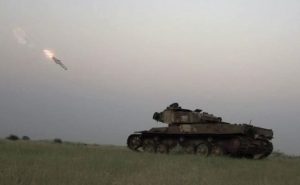 In response to continuing skirmishes with its neighbors China and Pakistan along the disputed borders, the DRDO has been actively testing domestic missile technologies in an effort to reduce its reliance on foreign defense equipment suppliers.

The third-generation ATGM, equipped with an imaging infrared seeker and integrated with a warhead, has, over several years, completed 10 trial launches, each of them declared successful. The missiles are now slated for production by the state-owned manufacturer Bharat Dynamics and subsequent deployment.

Read more: Indian military actions in Kashmir: Can a war be ruled out?

The test of the Nag missile is the latest in a string of trials performed by the DRDO in the past month. The agency had earlier tested the supersonic surface-to-surface strategic missile Shaurya, as well as the Nirbhay cruise missile.

Before the success of the Nag, India had long lacked credible anti-tank weapons and was forced to purchase them from overseas partners. Last year, when tensions with Pakistan flared up, it made an emergency purchase of around 200 spike anti-tank missiles from Israel, all of them immediately deployed along the so-called Line of Control in Indian occupied Jammu and Kashmir to bolster defense against Pakistan.

Final user trial of 3rd generation Anti Tank Guided Missile (ATGM) NAG was carried out today on 22 Oct 2020 at 0645 hrs from Pokhran range. The missile was integrated with the actual warhead and a tank target was kept at designated range. pic.twitter.com/GZ4oJWyNWs

The Nag missile system will be inducted in the Indian army and will extent India’s range from 4 km to 7 km. While, previously it had to import missiles from Israel and US with a 4 km range.  India, till now, has been using second generation Milan 2T and Konkur ATGMs. However, with this new missile system India is now better equipped to defend it’s borders against enemy threats.

India has been facing a two-front threat for decades, amid unresolved issues about disputed borders with neighbors Pakistan and China. In May, conflict flared up again in the Ladakh region, with armed skirmishes alongside the Line of Actual Control, India’s de facto border with China, though the two countries are currently in active talks to de-escalate the tensions.

DRDO chairman Dr G Satheesh Reddy appreciated the efforts of the research organization, the Indian Army and the industry in bringing the missile up to production phase, NDTV reported.

RT with additional information from GVS

Dubai gets ready to go kosher after Israel peace deal

Can You Terminate Your Flight Due to the fact of the Coronavirus?