When speaking of global connectivity, there is no better example than the world’s largest project; China’s Belt and Road Initiative (BRI). To overcome the logistical chokepoints of sea routes through the straits of Malacca and the Suez Canal, the BRI, which started in 2013, envisions a new silk road, reminiscent of the trade routes that connected the Tang Dynasty with the Roman and Byzantine Empire.

The “Belt” refers to the Silk Road Economic Belt, an overland push that runs through Central Asia to Europe; and the “Road” is the twenty-first Century Maritime Silk Road, a maritime route that runs through Southeast Asia, Africa, and Europe. Since 2017, however, the Digital Silk Road (DSR) has been added to BRI as the BRI in the cyberspace (see Figure below).

Similar to the energy, transportation, and logistics connectivity under the BRI framework, the DSR promotes digital connectivity by teaming with BRI countries to jointly advance the construction of cross-border optical cables, broadband networks, and other advanced IT infrastructure.

So far, digital spending along the Belt and Road still lags that on hard-infrastructure projects, but the related capital investments are rising. According to the statistics from the Mercator Institute for China Studies in Berlin, by early 2020, the DSR market saw at least US$7 billion in loans and investment in cables and telecoms networks, over US$10 billion on e-commerce, mobile payments systems, and the like, and more on research and data centers.

The digital dimension has also expanded hugely from an initial focus on IT infrastructure to the digital economy ecosystem, such as e-commerce hubs and smart cities. In particular, the relevance of the DSR has increased dramatically since the outbreak of COVID-19, the traditional “Belt” and “Road” is mainly based on human interactions in the offline world, which has been disrupted by the 2020 pandemic.

Green transformation in the offing?

Whereas the BRI often brings to mind a web of enormous physical infrastructures, such as roads, railways, energy pipelines, and ports, the DSR could potentially bring a green transformation to both infrastructure and economic models in emerging markets for their future growth. Here’s why: First, the Digital Silk Road will play a constructive role in making infrastructure development more viable, efficient, and sustainable in the long run.

Now, a rural entrepreneur only needs to have a 20-square meter space, a second-hand computer, and a basic internet connection to become a global retailer!

For developing countries lacking critical infrastructures, it is highly valuable to build railroads and power plants. Adding new technologies, the DSR will help make the new infrastructure assets the most competitive and efficient as possible. For example, smart sensors and advanced monitoring systems can be integrated into infrastructure to ensure the optimization of resources.

Second, the upgraded IT infrastructure at the BRI countries can transform their traditional businesses into digital ones and new growth sectors to scale – both will generate growth and jobs in fields away from polluting industries. For example, the mobile internet creates jobs in rural areas, turning farmers into online vendors. When new channels are created to transport farm produce to cities, every farmer can be an online merchant as the demand in cities for fresh, safe agricultural products grows rapidly.

In the past, fruit farmers in China used to sit and wait on the side of the road for buyers, but few motorists stopped to buy because most of the traffic is on the newly built motorways. Often, the farmers had to dump rotten grapes and oranges on the roadside. Now, a rural entrepreneur only needs to have a 20-square meter space, a second-hand computer, and a basic internet connection to become a global retailer.

Nowadays, ASEAN countries such as Thailand are learning from the Chinese rural e-commerce model to empower their villagers to embrace e-commerce and increase earnings. Third, the DSR may help to develop a more resilient global supply chain in the post-COVID age. The existing supply chains are stressed during human-centered events and can struggle to adapt, as illustrated by the disruptions from the Covid-19 pandemic.

Suppliers in the chain temporarily ceased production, and logistics providers could no longer transport goods as seamlessly, particularly across borders. Blockchain led solutions could potentially help move goods faster, as the technology gives its users not only a high degree of data visibility but also a belief in transaction accuracy. 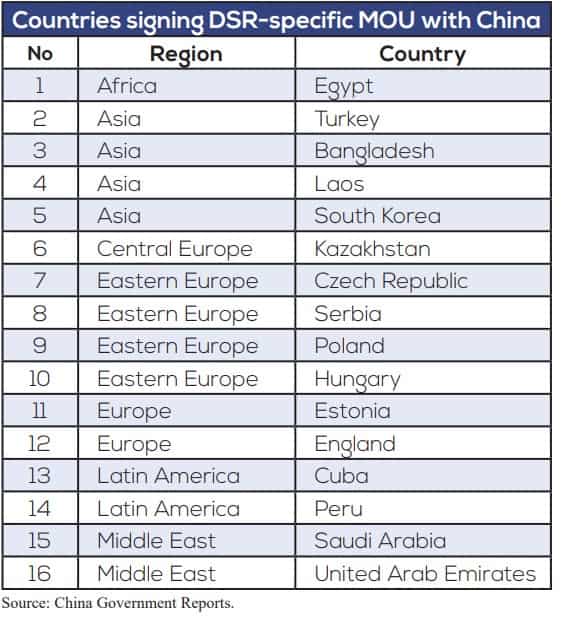 For example, in April 2020, China launched the Blockchain Services Network (BSN), which is a critical part of China’s national blockchain strategy that was announced by President Xi in late November 2019. It is the largest blockchain ecosystem in China, and in the DSR context, it is rapidly expanding its network overseas. Such blockchain platforms, in combination with cloud technology and robotics and other innovations, can address the pain points of today’s supply chain.

Internet outreach: “win-win” for all stakeholders?

Finally, the Digital Silk Road is critically important for a sustainable global economy because it helps to address one of the most fundamental challenges: providing basic internet access for more than 3 billion people, roughly half the world’s population, who still have no internet connectivity. These “unconnected” lack the benefits of applications ranging from social networking to online shopping to access to a cornucopia of entertainment.

Compared to China, the infrastructure needs and financing gap are even more significant in the emerging markets, where the young generation’s quest for communication, entertainment, and self-expression are the same. People want to stay in touch with each other, to be entertained, and to express themselves, which is true in the rich world and China as well as everywhere else. The poorer people are, the more a smartphone outperforms all the other options they can afford to turn otherwise empty time into something enjoyable.

For the rural area teenagers, the ability to consume media of their own choice is a sea change from having to watch whatever grandpa has chosen on the single television shared by large families. As a result, the DSR is making a direct, positive impact on the individuals’ quality of life in the emerging markets by the rapid construction of the information and communication network infrastructures.

The best example is Pakistan East Africa Connecting Europe (PEACE) submarine cable network fronted by Chinese firms. The PEACE cable system with landings in Pakistan, Djibouti, Egypt, Kenya and France — in the first phase — will connect the three most populated continents in the world, providing critical interconnection to the economic corridors of Asia, Europe, and Africa.

The US has created a Blue Dot Network (BDN) to facilitate “sustainable infrastructure projects”, which clearly reflects the contest being played out between China and the US

The PEACE network is set to broaden its reach even further by 2021 to reach South Africa. Amid a trade war and a tech war between China and the US, the DSR, not surprisingly, is also being pushed back by the US. Teamed with Australia and Japan, the US has created a Blue Dot Network (BDN) to facilitate “sustainable infrastructure projects”, which clearly reflects the contest being played out between China and the US in infrastructure development in the emerging markets.

The cross-border cyberspace governance debate – rules for who controls data, and therefore, harnesses their value and increase the nations’ innovation power – is not merely technical problems; instead, it is at the core of geopolitical competition that will shape the twenty-first century. Nevertheless, China’s expanding “Digital Silk Road” into ASEAN, Africa, and Middle East countries has immense positive implications for their growing needs for both digital and physical infrastructure.

Setting aside the usual debates about democracy, privacy, administrative transparency, interest alignment between stakeholders – all of which are legitimate concerns deserving their own analysis – those markets could substantially benefit from partnering with China for their own version of digital transformation, such as the “Thailand 4.0 policy initiative” in Thailand, “Smart Nation initiative” of Singapore, and “Digital Transformation Strategy for Africa” among African countries.

Read more: Op-ed: A focus on digital connectivity in the China-Pakistan Economic Corridor

Therefore, the DSR projects can be a “win-win” for all stakeholders. By the second Belt and Road Forum (BRF) in April 2019, the list of countries that had signed DSR-specific MOU (memorandum of understanding) with China had extended to 16 from almost all major continents (see Table above). Since the 2020 pandemic, the global telecoms infrastructure has been overloaded with a surge in traffic and 5G network, with its larger bandwidth and low latency is seen as a solution. Therefore, in the years ahead, China’s Digital Silk Road is likely to accelerate and expand.

Winston Wenyan Ma, is an investor, attorney, author, and adjunct professor in the global digital economy. He has previously worked as a Managing Director and Head of North America Office for China Investment Corporation (CIC), China’s sovereign wealth fund. Mr Winston has been a member of the Council for Digital Economy and Society. He is the author of China’s Mobile Economy (among “the best 2016 business books for CIOs”, The Hunt for Unicorns, and The Digital War (Wiley, December 2020).

The views expressed in this article are the author’s own and do not necessarily reflect the editorial policy of Global Village Space.